Lighter or darker images are sometimes needed, it's a personal choice. Sometimes printing needs a lighter image than does the video screen. There is the known problem called "dot gain", meaning the printed dot's ink soaks into the paper and spreads out, resulting in a larger darker dot than was intended.

Sliding the Gray Midpoint to the left lightens the image midrange tones, and is rather independent of the highlights and shadows. It's an extremely good way to adjust overall image brightness. Generally it's the middle tones that are the most important to the image. You can do this step at the same time as when adjusting the B&W Points above. I have separated them only to clarify the text.

The Midpoint is the middle gray center value 128 in the 0..255 overall range. If we move it left, the new point will become 128, with more values on the White side now, and fewer on the black side, so the image is lighter.

The Midpoint is not shown as 128 numerically, but instead shows a value near 1.0. Midpoint values less than 1.0 are darker, and values greater than 1.0 are lighter. This value is the gamma of the scanner's input/output curve. Values of 1.0 to 2.0 are typical. You will hear people say they scan to perhaps 1.8 gamma, and they refer to this setting. I find about 1.4 is often nice on the 24 bit E3 for ordinary color prints on the video monitor. The 30 bit 35t Plus film scanner seems to need much less, if any. It will depend on your monitor and your printer too, and it will be different for the two of them. Image programs often have a Preference Adjustment for your own monitors gamma, which affects what you see too (not the image, but how you see it). 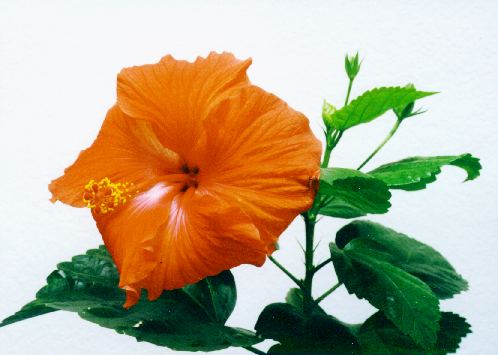 Scanned image lightened with midpoint at 1.41

And there are other ways to adjust gamma or mid-range brightness. The Curve Tool described elsewhere is another standard tool perhaps more commonly used by professionals, but the histogram tool performs a similar function, and is much easier to use, and doesn't risk upsetting the color balance nearly as much. You may not need the Curve tool for a long time, but you need the White and Black Point Histogram the first day.

External software can instead set the B&W Points after the scan.

Above is the Photoshop histogram tool, called "Levels".

Above is the histogram in Micrografx Picture Publisher 8, called Tone Balance.

Good tools are available, but not many photo programs offer them. These programs clearly offer the best photo tools of any I know. These tools can be extremely useful, especially if the scanner software does not offer the histogram. But it is really better to do this in the scanner during the scan, at least the major part of the adjustment, because the scanner's curve is adjusted on the 30 or 36 bit data BEFORE the gamma conversion, preserving shadow detail. The Dynamic Range section about 24 bit vs 36 bit scanners can better explain why. This is true even of 24 bit scanners due to the exponential gamma conversion of the data, but in the case of 36 or 42 bit scanners, the 36 or 42 bit data has even greater range for manipulation than does the 24 bit output data. The 24 bit output data is (generally) all that is available to the external program to manipulate. We lose less data (ability to differentiate unique tones) if manipulating the curve during the scan instead of after.

Some scanner drivers can output the 30 or 36 bit data as 48 bit words, however most image programs cannot accept it. Photoshop is one that can. If your scanner does not provide good histogram/curve tools, you can output 48 bit data and manipulate it in Photoshop. However, if your scanner provides these tools, there would normally be little point of it, the scanner can do it better.

There's much personal preference in these choices, and there are different choices too. The controls are powerful, but ScanWizard shows the real time result of the adjustments, which makes it easy. So experiment a little, and adjust it like you want it. When you get it close, don't hesitate to scan it to see the finished full size image, and discard it and try again a little different to get exactly what you want.