Resolution might add detail, but it can't add sharpness, they're different things. Resolution adds the detail that lets us recognize features. Sharpness makes edges clear and distinct. The standard tool of choice for sharpening is the UnSharp Mask filter (called USM).   It's magic!   Most good programs have a USM. Scanners often include a USM tool, but normally the USM sharpening is done after the scan, as the final operation in an image program that saves the image file.

Sharpening filters emphasize the edges in the image, or the differences between adjacent light and dark sample points in an image. The generic Sharpen or Sharpen More filters are often for graphics, and are less suitable for color photographic images. However, filters do vary, the name "Sharpen" is vague and is not always very descriptive, it is hard to say what they do. But the UnSharp Mask is where the action is for photographs, the standard tool. It offers the necessary greater control.

The UnSharp Mask is wonderful magic, but still, excessive and improper use of its parameters can produce artificial images with bizarre problems. Such problems can include overly contrasty images, edges that look like halos around objects, jagged edges, and specked or mottled areas, like faces with bad complexions. So if this might be your problem, back off, and practice moderation. (Excessive JPG compression can also give problems with somewhat similar appearance). The UnSharp Mask filter is absolutely wonderful indeed, certainly very worthwhile, and perhaps even required! But do experiment and pay attention to the results, and practice moderation.

Unlike Setting the Black and White Points, it is not of any particular advantage to apply the USM sharpening during the scan. Sharpening can be done as well at any later time, and in fact, if additional image processing is to be done, the USM is always best done last. In computer-talk, "filter" is a generic word which just means a tool or process where you "put something in, and get something out", that is, it separates or refines the object in some way, a philosophy not unlike a coffee filter or a color filter. Mask is often a synonym, but it also implies a specific localized area is treated.

The term UnSharp Mask comes from a photographic darkroom technique of exposing the print paper through an underexposed and blurred positive film copy of the negative sandwiched with the real negative. This creates the same type of sharpening shown below. The programming details are rather technical, but it is a mighty fine sharpening tool.

We can show what it does however. This tiny image is a simple three tone graphic image containing two contrast edges, shown unsharpened on the left, and sharpened with the Unsharp Mask on the right. It is also shown greatly enlarged about 10X so the pixels can be seen well. Remember about anti-aliasing blending the edges with intermediate tones? (usually only on angled or jagged edges). Unsharp Mask is the opposite, it involves making the pixels on the light side of the edge even lighter, and making the pixels on the dark side of the edge even darker, as shown, to increase edge contrast. This then shows the edge better, therefore we perceive the edge to be sharper. Give this a little thought, because the same effect happens to all of the edges in your photograph with the Unsharp Mask. This image also demonstrates the halo effect due to too much sharpening. 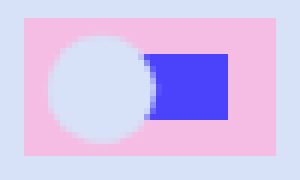 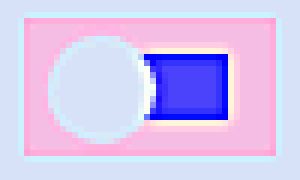 The UnSharp Mask filter has parameters that allow it to have variable effect, to primarily affect the strong edges in the image, and to specifically exclude the smoother low-contrast areas. It is NOT a simple on/off choice. It is these parameters that make the USM so powerful and useful for photographic images. The Photoshop USM tool is shown, and Elements USM is the same.

Fine details, and/or low resolution images (like video screen images) need a small Radius, else sharpening can be counter-productive to fine detail. More Radius is needed for high resolution (the effect is less visible at 300 ppi), and less Radius at video screen size (75 ppi size pixels are larger).

In Adobe USM on images for the video screen, I start at about Amount 100, Radius 0.6, Threshold 3, and a little more threshold for face portraits to avoid causing complexion problems, maybe Threshold 6 then. For printing at 300 ppi, I start at perhaps Radius 1.5 and amount 100. Inkjets need more than the continuous tone printers (like the Fuji Frontier printers at Wal-Mart or Costco photo processing). There are different combinations, and purposes, so experiment, and learn not to overdo it.

Fuzzy images are certainly exceptions that may need more. Film from flatbed scanners scanned at the highest values of 2400 to 4800 ppi will need extra amounts of sharpening.

How it looks on the continuous tone video monitor is not the same as it will print on inkjet printers or commercial prepress screens. Printing will need more than looks right on the screen. A few scanners always sharpen automatically, with no way to disable it. It makes these scanners appear better than they are, but it reduces the options. I would prefer to do USM externally, after the tone-altering and pixel-altering editing work is completed, and certainly after any resampling work is competed.

Adobe Photoshop has the definitive USM tool, and Elements has the same tool. Photoshop CS2 has added Smart Sharpen, which is USM with additional options, and seems very nice. In these Adobe programs, you can hold the left mouse button down on the little image in the tool to see the unsharpened original, or let up to see the sharpening effect.

Paint Shop Pro USM is similar, but the controls are named Strength, Radius, and Clipping, instead of Amount, Radius, and Threshold, but otherwise it is the same concept.

PhotoImpact 8 has an improved UnSharp Mask filter, but earlier versions worked a little different, and with defaults that seemed too strong, but worked OK if you backed off considerably, start at the bottom end and work up as needed.

If using the USM later in the image program, and if you don't like the results, don't simply do it again on top of the previous try. Instead, use menu EDIT - UNDO to go back to the original image, and then try different USM values.

Repeating the EDIT menu UNDO and REDO back and forth will quickly show the results of the USM, for rapid comparisons of the change.

Radius controls how wide the edge rims become, and Radius = 1.0 is about the right ballpark, with 0.6 to 2.0 often being useful. Higher Radius values can cause halos at the edges, a detectable faint light rim around objects. Radius units are not the same as pixels, the units step in tenths, but the Radius width is usually at least 4 pixels overall, you will see various effects. Radius is a very important parameter, and the easiest way to ruin a good scan is with too much Radius. Inanimate objects can use the most radius, human faces can tolerate the least, and landscapes fall in between. But it really depends on the size of the details. Fine detail needs a smaller Radius, or else you may obliterate tiny detail of the same size as the Radius width. Large images have larger detail (more pixels involved) and can use more Radius, so therefore printing at higher resolution can support the larger radius. Radius and Amount interact, reducing one allows more of the other.

Threshold specifies how far apart adjacent tonal values have to be (values of 0..255) before the filter does anything to the edges, before it is judged to be an edge at all. This lack of action is important to prevent smooth areas from becoming speckled. Low values should sharpen more because fewer areas are excluded. Higher threshold values exclude areas of lower contrast. Human faces want values greater than 1 or 2, like perhaps 5 or more. For inanimate objects, perhaps 0 or 1 is useful. General work, try 3 or 4. This control has little effect at high values, but has more effect changing between low values of 0 to 5. This Threshold is not to be confused with Line art Threshold.

Amount is like a volume control, exaggerating the edge differences (how much darker and how much lighter the edge borders become). Amount interacts with Radius as to degree of sharpening, but it does not affect the width of the edge rims. Amount has a large effect, and values of 80 to 120 are normally usable if the Radius isn't too large.

USM should be the final operation, after all other adjustments, especially after any resampling. The exception is the histogram Output Level settings to limit the levels for halftone printing, which should be done last, after USM.

In fact, one philosophy is that images should be archived without sharpening, and only sharpened at time of use when the specific purpose is known. Sharpening cannot be undone after the image is saved.