This possibly can be considered an advanced section. The subject is certainly not difficult, but it will require a bit more effort than the rest, It will involve use of individual RGB channel adjustment with the Histogram and Curve tools. The section also contains large and slow images.

Color correction of images is hard to describe. Many of the color tools don't have very wide or precise range, and frankly, other than minor tweaks, they don't always work so well. They are not always sufficient for the bad problems. The situation is often complicated by the need for non-linear correction. The color cast often varies with luminance, so that the shadows and highlights need different amounts of correction. This can rule out the simpler tools except for the mild color casts.

Faded slides are among the worst cases, so we look at that here. The method is general however, and is useful for most any purpose. These are 325 dpi scans of a 35 mm slide.

This is an Ektachrome slide, 40 years old when it was scanned, and it is pitiful, very red all over, more than pink. Your images will not likely be worse than this. Kodachrome slides keep much better, but my luck with old Ektachome has not been so good. This one has faded badly, and some spots have developed. 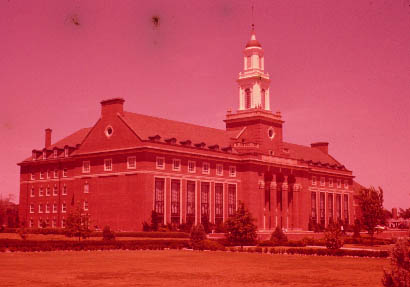 The slide did not become more red over time. Film contains Cyan, Magenta and Yellow dyes, and the dyes faded, mostly the Cyan dye faded away. This is NOT just a color cast that can be "corrected", it is permanent damage needing repair, beyond correction. The detail in the Cyan layer is gone now. It's a very tough image, image detail is permanently lost now. 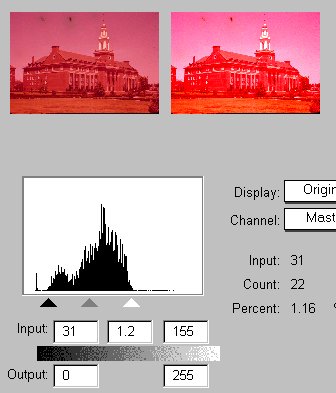 This is its histogram, and a conventional setting of the B&W Points.

Then, to that is added the ScanWizard Color Tint tool. 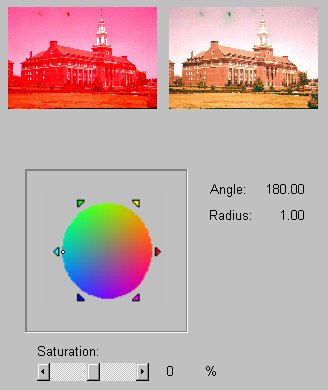 The conventional treatment is to move the center of the Color Wheel away from the color of the color cast. I have moved the center point as far away from Red as possible, but it is not the right treatment for this slide. See the tiny white center dot has been moved to the far left, all the way towards Cyan, specifically away from Red. It is better, but not sufficient. But generally with only a slight color cast, you can simply move the center point of the color wheel a bit in the opposite direction of the cast.

The color wheel does show the relationship of RGB and CMY colors.

Note the basics of it:

Hue and Saturation tools use this color wheel too, although few show it clearly. Hue is the movement around the circle, Red is 0 degrees, Green is 120 degrees, and Blue at 240, returning to red at 360 degrees. Saturation is a move across the radius of the circle. The center is gray.

Photoshop has one of the better Color Balance tools, allowing separate settings for shadows, midrange, and highlights (Umax Magicscan has a similar tool). But the Photoshop Color Balance range also does not have sufficient range for this particular image, the required change is too extreme. Notice the relationship in the colors is the same here, that Cyan is the inverse of Red, etc. 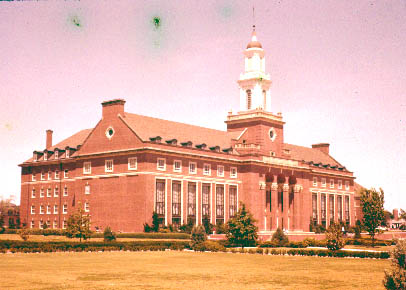 Anyway, that scan from ScanWizard above is vastly better, but it is still light pink all over, particularly noticeable in the sky. The spots are green.

This is hard if the image is so bad to start with. Too much Red is actually too little Green and Blue, they have faded. The color wheel shows us that adding Green and Blue is the same as removing Red.

But there is a better way.   Let's start over, see next page.