Clear out all of the previous settings (Reset button in Microtek ScanWizard, or Preview again in Umax Vistascan). This time, we will use the histogram tool, but instead of using the Master Channel (which is the composite of all three RGB colors), the individual RGB channels are used. 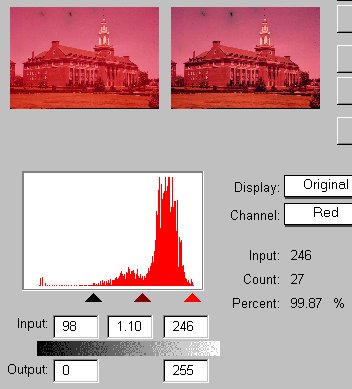 Here is the Red channel adjustment in Microtek ScanWizard. I have clipped the dark end with the Black Point somewhat (large percentage, but few pixels). This darkens the red, reducing the luminance by shifting the red mid tones toward the zero end. Darker is less red intensity. 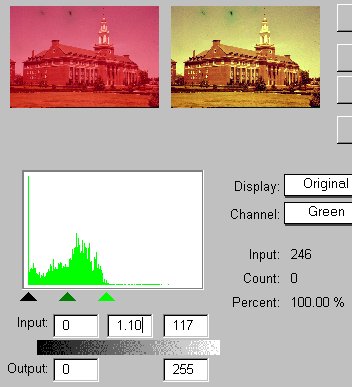 And the Green channel adjustment. It is way too green after this, but we are not done yet. Adding blue and green in more or less equal amounts will offset the Red. Setting the White Point to be about mid point brightens Green substantially. Tonal values previously near the midpoint are brightened to become 255, and values lower than 128 are stretched upward too.

The big spike at zero is the count of pixels with values of zero for green. That data is gone now, faded away. Our magic is limited, but we do have a few tricks. 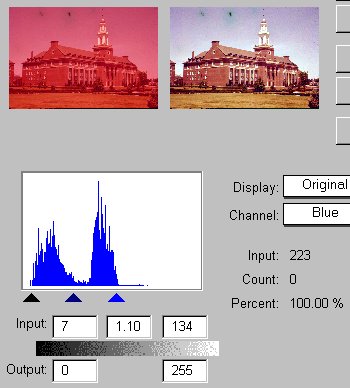 And then the Blue channel adjustment brings the overall color into balance. Again, tonal values previously near the midpoint are brightened to become 255. 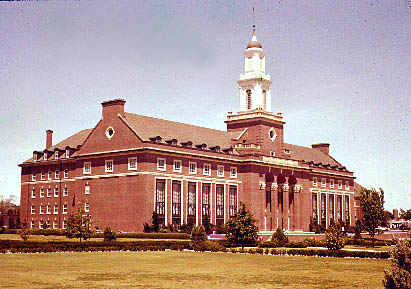 Here is that corrected scan with the three channels adjusted as shown, and after a little Clone Tool touchup and USM sharpening.

The three-channel adjustment worked wonders, except I'm not happy with the green grass yet. The grass is pale and yellowish, but the image overall is very much better than before. The white steeple is white and the sky is blue. Some programs like Photoshop will allow you to mark an area and apply selective correction only to that area. 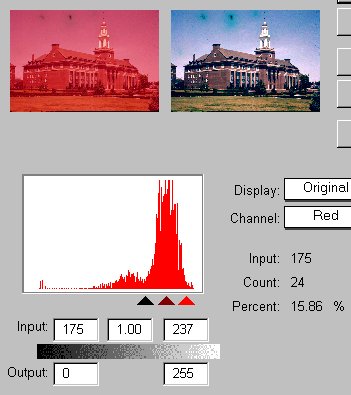 I took another try, and clipped the red Black Point much more, as shown here. This darkens the image a little. I like that, it's a tad more dramatic. Less red helps balance the green, the grass is more natural, the sky is darker blue. It could be lightened with the Master Channel Midpoint, but since we have so drastically modified the image, our range will be somewhat limited. The Green and Blue were not changed, still the same as shown above.

Experimentation is desirable, but using the right tool helps a lot too. 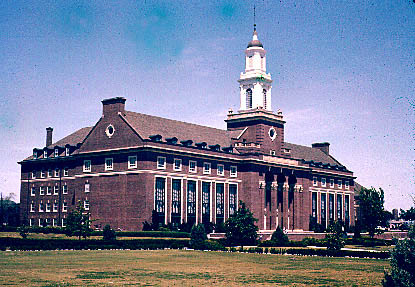