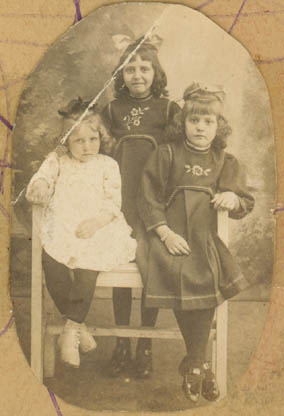 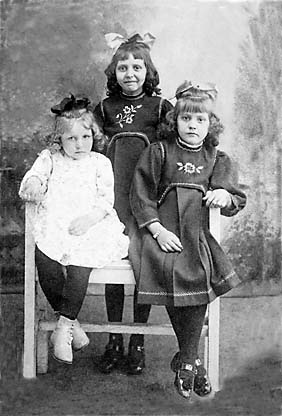 The Before and After images.

This is a 1917 photo from the Netherlands, somewhat faded and damaged with a crease. It has been cut into an oval shape, and has the back of an old cardboard frame glued to it. The original is on the left, and the restored image is at the right.

The important tools are the histogram for restoring contrast, and the Clone Tool for repairing damage. The photo was only about four inches tall, so I scanned this at 600 dpi, not for detail, but for image size to aid working with the Clone Tool at enlarged size. The plan was to resample it smaller at completion(resampled to 25% size above). 300 dpi would really have been quite sufficient, and you can always work on the image when zoomed-in to 2X size (that's what I do to clean everyday scans of dust spots). I scanned it in color mode and worked on that, and then converted to GrayScale and sharpened with the Unsharp Mask as the last two steps. It is a B&W picture, but if repairing stains and discoloration, it's often easier to work on it in color mode. This time, there was no good reason for color really, but I wasn't sure yet if I wanted to leave it in color to show the original tone, or change it to grayscale.   Grayscale won. It does not change anything here, to work in color or B&W. 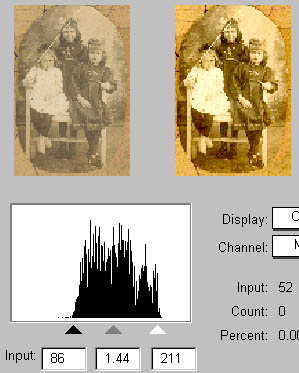 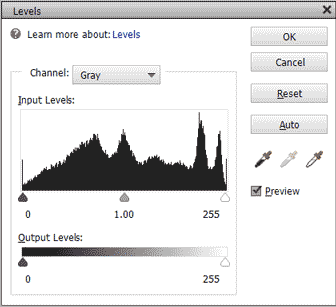 The Before and After histograms.

This first one is a scanner histogram tool, and it is probably best done in the scanner (higher internal bit level). But photo editors better than the free ones will have them too. The second one showing the result is Adobe Elements, and Adobe calls it a Levels tool, which is same thing (it can change the data levels if you move the pointers) Thee histogram levels is very powerful tool for utilizing the full 0..255 image tonal range to improve contrast. It's good because it shows what is needed. In the first one, the Black pointer tool (the little black pointer) is adjusted to the data point that will become Black (will be moved to zero) in the photo. The White pointer tool sets the new White Level (that will become White, moved to 255 at right edge). This stretch of the data increases contrast (blacker blacks, whiter whites). And the histogram is the best Contrast tool, the histogram shows what could be done (if appropriate for your image). Ansel Adams said (speaking of B&W images in those days) that all images should have some pure black area and some pure white area, and his pictures showed much of that idea. Color images don't handle those extremes as well because high contrast color becomes glaring (makes a better graphics poster), and it can also change colors in them.

The center (gray) pointer (technically it changes gamma) is the best way to change brightness (Brightness done this way does not change the end points to risk unwanted clipping). Generally the tool named Brightness is early style, and much less good. Numerically more than numerical 1.0 is brighter, less than 1.0 is darker.

Try these, you'll love it. The scanning technique is NOT different from already discussed in the Simple Way to get better scans pages. There are four major peaks in this histogram data, and it seems reasonable that these would generally be associated with the tones in the dark dresses, the background, the lighter background, and the white dress.

Scanning this with the Black & White Points slightly clipping restores the maximum data range and contrast. The thin vertical lines at 0 and 255 signify mild clipping (happened because my points were set just inside the data area). Clipping the grayscale images histogram end points a bit like this for more contrast is sometimes better in many cases (for grayscale), like if that area is sky or other uninteresting detail.

See the little tail of pixels at the left end of the original histogram data? And some less so at the right end. It's almost always a good idea to clip these few pixels off (let them go to full black). I positioned the Black Point at the major base of the pixels, as shown here. Perhaps even inside of it to clip even a bit more. Clipping tones at the Black&White Point ends can be dramatic, to increase contrast, and to restore faded or washed out color prints to the original colorful tones. Experiment!

Speaking of intentional clipping, I should add that grayscale images often love a moderate amount of it, but clipping is generally detrimental to color images (it can change colors but grayscale survives that). In this case, the limited range of the original histogram is showing us that we could move the Black Point so that the gray tone of value 86 becomes black with a value of 0. Similarly, we positioned the White Point so that the gray tone of value 211 becomes white with a value of 255. Don't be concerned with these numeric values, we are judging this only by the shape of this particular image's histogram data. We see that much of the range is not being used. We can see where the data starts and ends in this image. Then this change increases the total range of the image tones from 211-86=125 to be instead 255-0=255, which is the full range of the image capability. Dramatically more contrast. Then we also brightened the image by raising the Mid-Point to 1.44 (done by sight for a pleasing result). This is the best Brightness tool, because it does not cause any clipping. And the Black Point and White Point is the best Contrast tool. The photo editor tools actually named Brightness and Contrast are really a little crude in comparison, OK maybe for more minimal jobs.

For example, compare the center girl's shoes in both larger images at the top of the page. We have black now. The same for the white dress, we have white now. This image has little detail in the white dress, but the original photo did not have it either, faded away perhaps. Clipping aggravates the loss of detail at the ends, and this is a major concern, so you always have to evaluate its effect.

Caution:   The histogram shows the data of the image. But in this case, the image includes the cardboard frame too, which we intend to remove. It happens to be midrange tones in this case, but if that surrounding area was pretty much black or pretty much white, it would drastically affect the histogram data. We would be judging the image based on non-image components. So, the point is, having surrounding areas of black (thinking that we will crop it away later) can be detrimental to the histogram process. You will want to more carefully include only the actual desired area of the photograph. At least be aware of this problem.

The histogram is the best tool, but finishing with the Adobe Auto Levels controls at completion is often good and dramatic. Those operations also adjust the Black & White Points with a little clipping, and the better job you do scanning, the less effect they have. When those operations essentially do nothing, then you've done a good job at the scanner. If they do a lot, you could have scanned it better. This job is better done in the scanner at time of the scan, where the original 42 or 48 bit data is still available.

This much so far can help any image. Please excuse the harping, but experimentation is the key, to see all of the possibilities.

The best advice for hesitant beginners is WADE IN. You will have a very improved viewpoint after the first few minutes.

To restore damage, basically you have to repaint the bad spots. It's tedious, but not always that difficult unless the detail to be reproduced makes it hard. Making the new work blend in well is much more important than exact artistic skill duplicating original detail. This is what the Clone Tool does, and most image programs have one. The magnitude of the work may look impossible at first sight, but it's really pretty easy, just keep at it. And remember, you can get away with a lot, it does not have to be nearly as perfect as you might think. If you are working on a larger image that will be seen later smaller, then it will look better smaller than it does now. The Clone Tool copied some existing hair area into the bad area, and also in the background area.

Don't forget you have an EDIT - UNDO menu (or maybe History levels), which you might use a lot, there are lots of Oops waiting here. Programs with several levels of Undo are a real blessing. Some areas you may have to redo several times to get it right. You will quickly improve your skill with practice. Do save the file often so you can always get back to a good point if worse comes to worse, without having to go back to the beginning. You may want several versions of backup files, saving varying steps or stages of progress.

The Clone Tool takes care of photo crease and tear damage and the scattered spots, by copying similar color and detail from adjacent locations. You have options with the Clone Tool... with several brush widths and varying feathered edges, and you will change back and forth often as you go. The Lasso Tool was used to remove the outer border outside the oval, and then the feathered Clone Tool was used around that oval edge to fill it and smooth it a bit.


Adobe Photoshop and Elements, and Corel PhotoImpact and Paint Shop Pro have good Histogram and Clone Tools, they all work about the same. 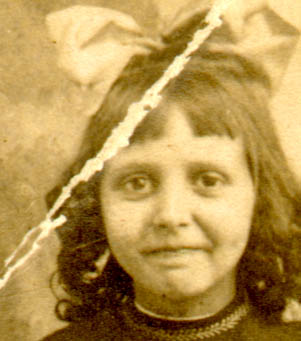 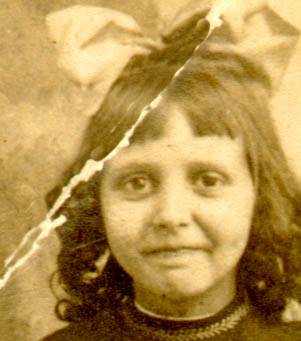 Here is a sample of the Clone Tool at work. The actual size of a ½ inch area of the original photo scanned at 600 dpi is a 300 pixel image. This is the Photoshop clone tool (called Rubber Stamp), but the Paint Shop Pro and PhotoImpact Clone Tools work the same and are as good. You can adjust the size of the Clone tool brush, and can dab with the Clone Tool, or in some cases, you can drag it with the mouse, and it will reproduce a line from the adjacent area, shown here. The difference in these two images is due to one stroke of the Clone Tool. I dragged it from the upper right to the lower left, and it reproduced the hair color in the white creased area. You can see the start and end of the stroke by the circular shape of the Clone Tool Brush (a little larger than usual, set larger especially for this). The area "copied from" is immediately above the stroke, and adjacent to it, all the way along the stroke. This is one stroke which it needs more work still, but you can see that the idea is that the Clone Tool will reproduce some similar detail in the damaged area. Notice the two highlights at the 1/3 and 2/3 stroke length are also reproduced. This reproduction of detail in the cloned area is the point.