Let's make the tones better, to improve the contrast of the image.

The controls named Contrast and Brightness are of very little value. They are even detrimental perhaps.   They discard data indiscriminately, in an unintelligent manner. More about this later, but suffice it to say that the Histogram tool is very much more versatile and useful. 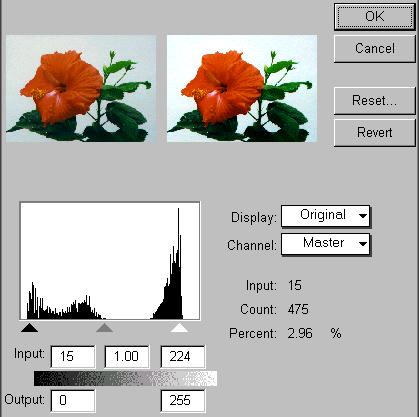 The HP scanners generally do not provide this standard tool (however PrecisionScan Pro has it). It is not that some scanners do not do this, but instead that they do this contrast adjustment automatically in software, and manual control is not available to the user. My opinion is that the HP philosophy ranks ease of use above control and versatility. And that is best for many users too, like one button cameras. Most scanner brands do have an AUTO contrast button that adjusts the tones automatically in the same way. But images do vary, and many users prefer to have the tools for full control themselves. That's my vote too, and this section is about how it works.

Some scanners may not show the histogram bar-chart data, but may still provide the same Shadow and Highlight sliders, described here as the Black Point and White Point, and they work the same. The data chart is a good guide, but we set these by eye anyway. Use the Preview image to watch that, and this discussion will help you understand what is happening. Any Gamma slider is the Mid Point described here. You can set the AUTO button for good results, and boost the midpoint to brighten, if necessary.

The better photo editor programs also have histogram tools, so this can also be done after the scan. If you have a histogram tool, whatever it is called, it will work the same as described here. This procedure is generally applicable to most (but not all) scanner brands, and some photo editors too. This is a common standard tool.

Whatever your Histogram tool is named, it will work as described here.