This curve is one representative use of the Curve Tool. It's rather extreme perhaps, but the concept is perhaps typical if there is such a thing. You can lighten any image by raising the center part of the curve (ScanWizard manual, several pages at 5-67). And moving the Gray Midpoint point on the Histogram to the left does the same thing.

But this curve is lifted substantially at the left end to steepen the curve considerably. This steep curve in the black end adds considerable shadow detail because, due to the steep curve, small changes in input tones result in much larger changes in the output tones. The image is not just lighter, raising the midpoint so much did that, but we can see more detail in the shadows now.

The entire curve is lifted, so the image below is also considerably lighter. Lifted any more, the green brightens so much that the red flower turns yellow, it is trying now (yellow is red and green). The highlight end of the curve is maxed out, flattened (saturated) so that many points now go to white. But in this image, it just purifies this background. So much so, the Magic Wand now can select the entire background with one click with a sensitivity of 15. 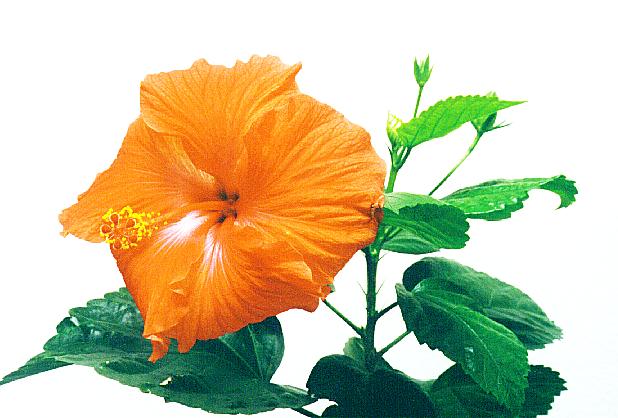 If you compare this scan with the dark leaves in one of the other scans, you'll see a big difference in the detail in the dark tones. It is not just lighter, it shows more detail. Below is an "all default" scan with the Reset button (the initial image from the Simple Way page). 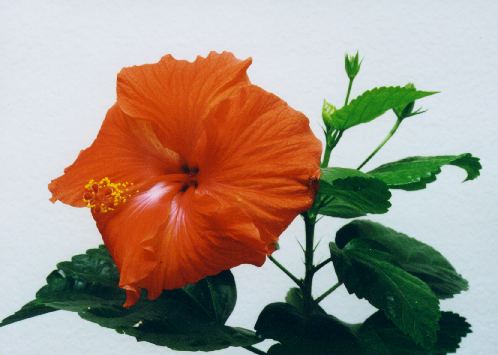 Do stop and contemplate the steepness of the curve at the black end, and how small changes in input make correspondingly large changes in output. This gives more possible shades of tones in the shadows.

Now granted, with an unmodified default straight 45 degree response curve, this one effect (of the two) would not seem to matter, since the output simply matches the input. But this is not the case. For one thing, we do always modify the curve (including use of the histogram), and the additional values are very helpful. But even at default tones, the scanner does much more of this mapping in a very routine way, described in Dynamic Range section). That part is a given, it is not optional, and therefore it is not shown in the curve tool. But it works in a very similar manner, and the 30/36 bit scanners have a similar advantage then too.

We are not speaking of Dynamic Range at this point. Dynamic Range in general is of the most practical importance in film scanners, because reflective prints have much less dynamic range to preserve. 24 bit scanners are not at a big disadvantage when scanning prints, but in a film scanner, 24 bits definitely would not be optimum. But this wider range when raising the Curve is helpful in all cases.

It is very easy to affect the image color with the Curve Tool. And hard not to at times. Clipping the three individual RGB curves to saturate the colors is a common effect of raising the curve. This clipping matters much less in grayscale, but can affect the colors of RGB.