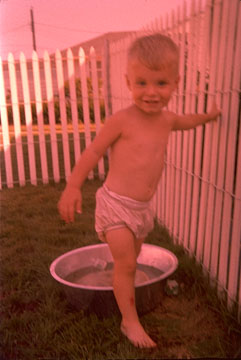 Here is where we were, an old faded Ektachrome slide.

I started over instead using the Histogram Tool, and set both of the Green and Blue channels quite drastically, lowering the White Point to the middle. This is essentially the same plan as with the Curve tool just before, but this time, the Red channel also had the Black Point set.

This image was a PhotoCD, so external software had to be used. This is Photoshop, but some other programs have functional histograms too.

However, this is not about Photoshop.   The big point I am trying to make is that your scanner driver should have good Curve and Histogram tools too, and you can also do exactly this procedure when you scan your print or film.   In fact, that is the optimum time to do it.   It is why most scanners provide the tools when most image programs don't bother.   It is why you have a 30 or 36 bit scanner, to aid adjustment processes such as this. Here, after the scan, we are limited to 24 bit data now.

The Red histogram Black Point was raised as shown.

The White Point end shows a huge peak of clipped red, fully saturated now. This was a PhotoCD scan, and one would expect some degree of clipping from automatic scanning processes. That is NOT why this slide is red, but it doesn't help much either. It is NOT a good assumption that the peak is in the original slide, there would be no reason to suspect that. If you were doing the original scanning, you could avoid doing clipping this end.

The Green histogram White Point was clipped to the midpoint, from the knowledge last time. This brightens the mid point tones to be near 255 now.

It was possibly no coincidence that the base of the second peak was already at this point. The previous scan did slight clipping at the White Point, even here (unimportant now). The big problem is that all our Green is shifted left due to fading.

I set the Blue histogram White Point to clip at the midpoint in the same way as the Green above.

Lots of blue at the zero end this time, data lost from fading, not to be recovered now.

How did I know how much to clip the Green and Blue?   I experimented a bit, and said "that's still too pink".   I was heavily influenced by the curve tool on the previous page, which suggested that the 128 midpoint was about right for the White Points of Green and Blue. You can see that is where we have left them.

The two methods shown here, the Curve tool before and the histogram now, have implemented essentially the same technique. In both cases, the Green and Blue White Point has been moved to the midpoint. We also adjusted the Black Point in Red in this second try. Could have, should have before too.

I can't say what to do in every case, you will have to experiment, but I can suggest to you that the Histogram and Curve Tools will be more productive than simpler tools for correcting color casts. Again, this image was a PhotoCD scan so there was no choice but to do this later in a program like Photoshop. But when scanning, your scanner has the best Histogram and Curve tools of all (because it is where the 30 or 36 bit data originates) and that is where this job is best done. 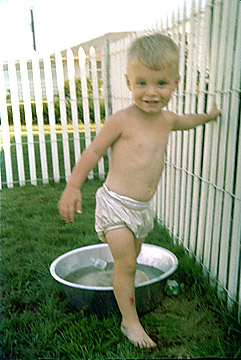 Here is the image after these adjustments.   It's great!   A very white fence, good flesh tones, good grass, and believable sky.