These are 60 dpi scans of a 6x4 inch photo print, to show the effect of some of the controls. The images are all sharpened a little with USM. To determine what the controls in your scanner do, you can simply look at the histogram to see what they did. I think you will find your scanner Brightness/Contrast controls will act very much the same as here. But the real purpose of this page is to present some histogram practice.

This image was selected because it's not a good photo technically. It needs help. The following images show some assorted and unrelated controls, just to see what happens in the histogram and image. 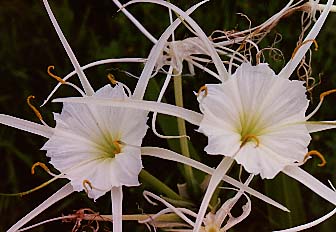 This is the default scan, with Reset button, and no other control was specified. It's dark, appears underexposed. The histogram when scanning negatives and slides often looks like this too.

Remember the shape of the histogram for the next topics below. It's a peak of blacks and a triangle heap of highlights. 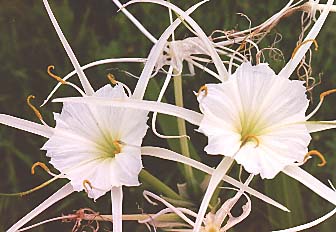 This is Reset, plus the Brightness control is increased about 40%.   It is brighter, but the contrast is poor. Notice that the histogram is simply linearly shifted to the right. Everything got lighter, every tone was affected the same by the Brightness control. The black end has become midrange gray. There was no intelligence in the process, every value was simply moved to the right by adding a constant value to every tone.

This is not the best control. 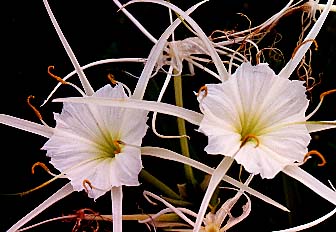 This is Reset, plus the Contrast control is increased about 40%.   Contrast emphasizes the differences between light and dark. To do this, the histogram data is "stretched" outwards at both ends. Blacks are blacker, Whites are whiter. The black end has been pulled off scale (because I said 40% to brighten the whites). The whites are lighter and do look pretty good, they ended up nearly at the right spot (OK, I admit it, I peeked at the histogram to decide on 40%). As in the Brightness control above, the change is not dependent on the image data, the overall range was just stretched. The histogram shows at a glance the situation and the possibilities.   Love and honor thy histogram.

See the tall spike exactly at 0?   New black pixels. The image background went mostly black, it has lost detail. Wasn't much back there, but it wasn't black. The spike at the end is from tone clipping, meaning we pushed pixels off the end of the scanners range. The count of pixels with value zero is much greater than before. Zero is as black as they can get. I really like the black background, but the lesson here is that this is not the best control either, we've lost a lot of data indiscriminately (but maybe I'll sneak back in here after you've gone <grin>).

Actually, what happens is that the Contrast control just moves the Black Point and the White Point inward toward each other in equal amounts. That sets new 0 and 255 points which we now see above in the resulting histogram. You can do the same thing manually, but you might not want equal amounts. You would probably prefer to look at the actual data to decide. Setting the histogram Black and White Points is better, because it offers easy and specific control. 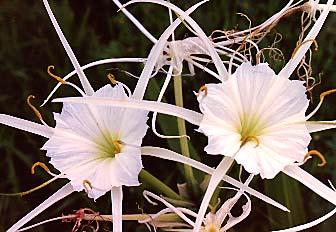 This is Reset, plus the Exposure control was increased about 60%.   The whites are pulled up (brighter, more luminance), but the zero point stays fixed. This fills the range pretty well, and looks pretty good. The Exposure amount was determined by watching the preview, and also the results were verified in the histogram. A few extreme highlights went white, which is probably good in this case. See that short spike at the white end, that wasn't in the original?   Those are new White pixels, from clipping. The count of pixels maxed out at 255 is greater than the previous zero value. 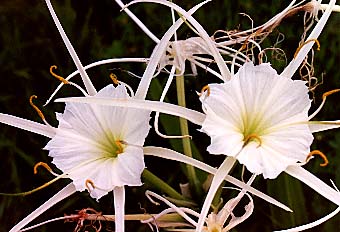 This is Reset, plus the White Point was lowered to reach the image pixels. The Black point was moved slightly. Basically, this is "The Simple Way Technique". We know from the previous page that this establishes the new Black (=0) and White (=255) Points wherever we specify, and the image tones are stretched to fill that total range. The entire range is linearly stretched, but moving the White Point hardly affects the black end.

The "Before" and "After" histograms are shown for comparison to the Exposure control above. The results are similar. The Exposure control slightly expanded the darker tones somewhat (the base of the black peak is stretched a little).

This is Reset, plus the ScanWizard Auto Contrast button was checked. The scanner software analyzed the data and automatically adjusted the Points. That's what Auto does, it does the Simple Way Technique of Setting the White and Black Points. The result is virtually the same as the manual adjustment just above when we did it manually. Auto slightly clips both ends. Auto typically must do that to be certain it has found the start of the data. It is a good plan, and it often does it well. But it's just a computer, it can look at the numeric value of the RGB data, but computers do not understand the pictorial image, and it is easily fooled. The computer cannot say "Oops!".

NOTE: The ScanWizard manual says (page 5-49, 50) that we should NOT use Auto Contrast simultaneously with the Color Correction button or the Gamma Curve Tool. It does seem to work however. It did here. But now and then, it goes crazy, with everything all Red or Green or Blue, but a retry almost always works. Still, I'd rather have the control and know how to adjust the Points and tones myself. It's very easy, just move those little black and white thingies with the mouse. <grin>

This is not a typical image. Rather than trying to preserve shadow detail, it instead begs to have the dark end clipped substantially.   This image has little midrange data to consider, which is ordinarily most important.

It's all arbitrary, you are the artist, and have full control over the image.